Moorah began as a one-man project of Count Hroozah, in late 2019.

Moorah is a post-blackmetal band from Prague (Czechia). In the music of Moorah you can hear the elements used by classic Czech and Norwegian black metal acts, as well as other post-metal, post-punk and blackgaze techniques. Moorah’s music doesn’t succumb to the trend of overproduced underwhelming black metal. Authenticity, intuitiveness and the power of the message is paramount in the music. Technically, Moorah’s music is based on the legacy of the Czech and Nordic black metal scene. Ferenc Fečo, the original drummer of the legendary Master’s Hammer and one of the first black metal drummers ever, has joined the band so Moorah’s music has gained a powerful drive. 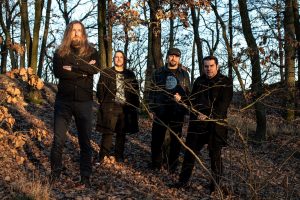 The AGR team is proud to introduce to you all our new signing, the Black Metal act Moorah. Moorah is a post-black metal act (Czechia) that

This website uses cookies to improve your experience while you navigate through the website. Out of these cookies, the cookies that are categorized as necessary are stored on your browser as they are essential for the working of basic functionalities of the website. We also use third-party cookies that help us analyze and understand how you use this website. These cookies will be stored in your browser only with your consent. You also have the option to opt-out of these cookies. But opting out of some of these cookies may have an effect on your browsing experience.
Necessary Always Enabled
Necessary cookies are absolutely essential for the website to function properly. This category only includes cookies that ensures basic functionalities and security features of the website. These cookies do not store any personal information.
Non-necessary
Any cookies that may not be particularly necessary for the website to function and is used specifically to collect user personal data via analytics, ads, other embedded contents are termed as non-necessary cookies. It is mandatory to procure user consent prior to running these cookies on your website.
SAVE & ACCEPT